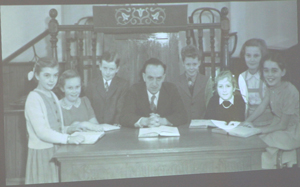 Siloh opened on 10th May 1910, when Ystrad Mynach itself was growing quickly following the sinking of Penallta colliery in 1905-10. These were the great years of the coal industry, and also years when the spirit of the Great Revival of 1904-5 was still alive in the hearts of the people of this area.

Siloh was not a new cause, though, since it was a daughter chapel of the much older Bethania church in Heol y Twyn, Lower Ystrad. That chapel first opened its doors in 1810, when Ystrad Fawr House and its estate were the heart of the little rural village of Ystrad Mynach. The house itself stood where the new hospital is today.

When the members of Bethania bought land on Bedwlwyn Road the focus of the village was changing, and the whole area developing rapidly. Their intention was to build a big chapel, a vestry and a manse on the land, but this proved too ambitious a plan, and in the end only the vestry was built. This building became Siloh chapel until it closed as a chapel in 2004. 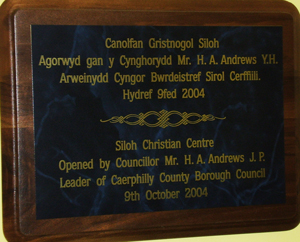 For years services were shared between Bethania and Siloh and the same ministers served both. Separate Sunday Schools were held however, and as the numbers who could not speak Welsh increased, it was decided to hold Bethania’s Sunday school in English, and eventually the services there as well. All Siloh’s activities continued to be held in Welsh to the end.
Siloh was a cultural as well as a spiritual centre. There were two services every Sunday, and a Sunday School each afternoon, but a variety of groups met there every week, and there were activities to suit all the chapel members. From 1910 until the second half of the twentieth century, the chapel or church was the focus of many people’s lives in Ystrad Mynach. 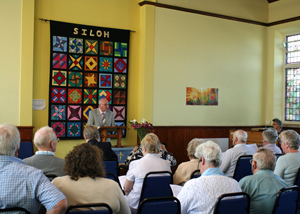 Service Commemorating the Centenary of Siloh

The summer outing and the Sunday School’s Christmas parties attracted children of all ages, and were a chance to enjoy the company of the other chapel members and their families. At Whitsuntide members of all the chapels of the village would process through the street, each group carrying the banner of their chapel – and everyone dressed in their best clothes.
Ministers like the Rev Oswald Jeffries and the Rev Godfrey Jones gave great service to the people of Ystrad Mynach, and they were supported in their ministry by the deacons of the chapel, who were also prominent in the village.

All religious causes have declined in the last half century and the decline in the number of Welsh speakers added to the effect of this on Siloh. A small group kept the flame of faith alive, and it continues to burn in a new form in today’s Siloh Christian Community Centre.